I have a site running on Siteground that seems to run properly. When I try to create a local version the Home (front) page displays nothing but the header. If I edit the page using BB there is content but no layout i.e.everything is stacked. All other pages in the site seem to be good although I did seem some broken links. To create my local environment I first created a backup using BackupBuddy and downloaded the zip. I then used Desktop Server to create the local environment. I have used this process many times on other sites and it works great. I also reported this problem to ServerPress and they found that the site runs without issue on a MAC environment but they reproduced the problem on a PC. I can provide the zip but it is kind of large. Do you think this can be a theme issue? If not do you have any suggestions to help narrow down the issue?

Is it possible for you to provide some screenshots of your issue, please. Such as: 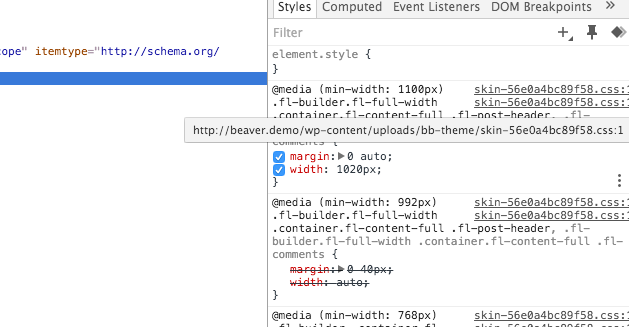 Is it also possible for you to open your Google Chromes browser console so we can see if you have any errors. If so, can you add these errors to your reply, please.

For some reason the home page is now (permalinks may have been rewritten) displaying content but it is all in a single text box module hence the stacking issue that I mentioned. This site is running on a localhost install with WAMP on windows so I don’t know how to enter a URL of an image file that you can get to.

I looked in the physical directory for the images above and they exist there. I’m confused by the url of the images though because both my WordPress address and my site url are set to http://www.sulphurgrove.dev. I did have this site running in a folder on the host at one time named ST2. Siteground was supposed to move the site to the root folder but it looks to me like the domain is redirecting to the ST2 folder instead of the root.

All very confusing to a relative newbie like me

Also, I am sure what you mean when you say ST2 folder? Ae you saying that your live site is in a directory called ST2 and this is now on your local site? How did SiteGround create this on your computer? Also, are the WordPress files in the ST2 directory or your root?

Thanks for trying to help. I went to the live server and did an edit(not page builder) on the home page in question to see if I could see anything. I did not change anything but when I then visited the site all of the Page Builder formatting was gone and everything was in a textbox. Since this is only happening on the home page I’m in the process of rebuilding that page with BB and will replace the original

I have just been re-reading your replies and I think I may have been confused. Have you migrated from local to live or is it vice versa?

If you have gone from local to live, you could try following the instructions on our KB article regarding migration and run the Serialized Search and Replace script. This may resolve your issue.

Here is the sequence of events.

Once this has been done I will do a local backup using BackupBuddy and give to SiteGround to completely replace the site. I think that somewhere along the way the database got hosed in some way so I’m hoping that this will fix the issue.

Thanks for your help

Anyhow, let us know how it goes when GD replaces the site.

Upon further inspection, I discovered that there were other pages that exhibited the same behavior so I rebuilt all ill behaving pages and got everything running on my localhost. It has been backed up and sent to SiteGround with instructions to completely blow away the old site and replace with the new one. At this point I think that we can close this issue as it seems to be due to the site being corrupted. Thanks for your help. I’ll let you know if I need anything else.

Thanks for keeping us posted and if you encounter any further issues, let us know.